The 7-day Alaskan JazzSea cruise proved to be an adventure, as a tourist and as a musician. The "Banjos Aweigh" band, which I conducted, was smaller than usual, but still entertained a packed "Hudson Room" venue. The "Buck Creek" jazz band was making its penultimate appearance on this cruise, with its final appearance on the Jan.3/09 Caribbean JazzSea cruise. They were missing their banjo player, so I happily sat in on a few occasions. 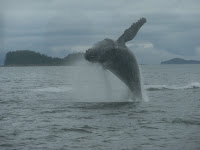 One of our Alaskan stops took us humpback whale watching (see photo I took) and another stop allowed us to see a calving glacier, The Marjerie Glacier, in Glacier Bay. You can see a video I took of the calving glacier on YouTube, by searching "timallanstrings". Our final port, before Seattle, was Victoria, B.C., where some of us musicians skipped over to "Hermann's" jazz club for a few songs.(See top photo). It was lots of fun!
Posted by Tim Allan at 9:58 AM

It was a fun 2 nights for me at the Bottich-Rathskeller in downtown Pforzheim. Rainer Daub, the organizer of my concerts, came up to the stage to play a few songs with me, including "Dueling Banjos". In the audience I was happy to see friends from nearby Sinsheim, including Gabi and Dierk Frerichs, the banjo collector who sold his huge collection to the Banjo Museum in Oklahoma. I was also pleased to meet Hans Dengler, the organizer of the newly-formed Munich Banjo Club, who drove all the way to Pforzheim for my concert.
Posted by Tim Allan at 4:19 AM

Check out these JazzSea cruises at www.jazzsea.com.
You can email Carol or Bob Neumann, the organizers, at jazzsea@aol.com
Posted by Tim Allan at 6:44 PM

The 10-day 25th Anniversary JazzSea Caribbean Cruise, returned to Ft. Lauderdale, Florida, on January 15, 2008 with many great musical memories, along with photos of some of the prettiest islands in the Caribbean. This cruise was so popular, that the entire Holland-America ship, M.S. Maasdam, had been filled with JazzSea enthusiasts.

It was Tim's pleasure once again to conduct the “Banjos Aweigh” pick-up band, made up of around 40 non-professional musicians and enthusiasts, ready to practice and learn a 45 minute concert repertoire. In the band there were men and women from the U.S.A. and Canada, as well as the Scottish banjo player, Michael Hart, the director of the Edinburgh International Jazz and Blues Festivals

The band predominantly consists of banjo players, with a tuba or bass player in the mix. They have usually been lucky enough to find a good pianist and horn player or two, as well as fiddlers and harmonica players. To add rhythm and humor to the gathering, they have added washboards, spoons, and sometimes a “gutbucket”. Tim welcomes any level of banjo playing ability, and he will try to include most other instruments into the band. Tim never knows who the musical surprises will be until they begin the cruise, so Tim tries to make the concert songlist relatively simple, to accommodate various levels of performance. In fact, to further simplify matters, Tim now has the full concert printed up in booklet form, “The Banjos Aweigh Songbook”, so that participants, who cannot play by ear alone, will be able to read the music during performances. Some prospective band members will even order their songbook well in advance of their cruise, just to be prepared. It ends up being a great learning experience for novices. Just look at their faces in the accompanying photo!

If anyone is interested in cruising while listening to 5 or 6 different jazz bands, or even participating with Banjos Aweigh, just check out http://www.jazzsea.com/ for information on upcoming cruises. There is a 7-day Alaskan cruise leaving Seattle on July 25. Another 7-day Caribbean cruise will leave Ft. Lauderdale on January 3, 2009, and Tim will be onboard for both of these, offering lessons and workshops, as well as performing and conducting Banjos Aweigh. “The Banjos Aweigh Songbook”, is available online at www.timallan.com or you may mail your order directly to Tim at the following address:

Through the fall of 2007, Tim provided 5-string banjo and guitar coaching to two actors in a movie called "The Love Guru", to be released in June 2008. Mike Myers, who comes from Toronto, wrote and produced this film, as well as acting in it. He plays the part of an Indian Guru who helps an American hockey team overcome its losing streak by using love. The movie was filmed in Toronto and used some of Toronto’s scenery as its sets. Since the Guru is supposed to be from India, a beach area just east of Toronto was set up to be an Indian village. (See photo)

Naturally, many of the extras had to be of East Indian descent. One of the musical costars, Manu Narayan, has Indian parents, but he was born in Pittsburgh. Manu had to learn 5-string banjo in two weeks for his scene in the finale of the movie, which was being filmed on the beach at the “Scarborough Bluffs”. Tim was hired by the music director, John Hoolihan, to coach Manu on the 5-string banjo first, then later on, the guitar. This young musician picked up both instruments very quickly, and was able to “dub” in his musical parts with much confidence and believability.(See photo) Another performer, Robert Schneider, also had some on-set banjo coaching from Tim in a "bar" scene.

To top it off, the young starlet, Jessica Alba, plays the Guru’s love interest. Tim's two sons , who are in their twenties, were especially envious of his proximity to this popular actress. Here's a shot of Jessica Alba with Mike Myers in his "Guru" costume.
Posted by Tim Allan at 1:06 PM

Tim was invited back to Pforzheim, Germany in May of 2007, for 2 nights of concerts at the Bottiche, Rathskeller. Each May, Tim starts his European tour by performing at this club in downtown Pforzheim. The following photo shows Tim performing with an antique tenor banjo, a Bacon & Day #9, borrowed from a German friend, Dr. Dierk Frerichs. In the second photo, the same banjo is being played by the concert organizer, Rainer Daub, while Tim 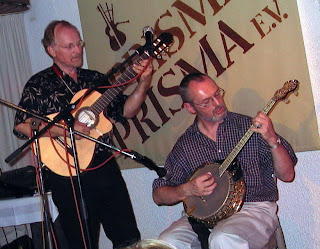 joins him with guitar.
Posted by Tim Allan at 12:44 PM 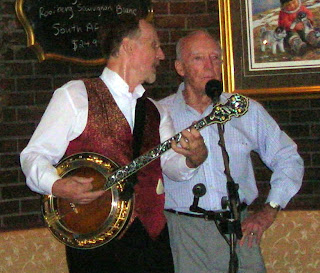 In May and June 2006, Tim performed again in Pforzheim, Germany where he also provided a guitar workshop at Musikhaus Steinbrecker. In early June, Tim then performed near Zurich, Switzerland, at a 2-day BanjoFest organized by the famous Swiss banjoist, Ruedi Bleuer, where Tim closed off each day’s concert. Tim also offered a banjo workshop for the banjoists from almost every country in Europe.


Tim and his wife, Nida, continued their tour and found themselves in southern Spain. The accompanying photo shows Tim in Granada, playing a street busker’s guitar, with the Alhambra Palace in the background.
Posted by Tim Allan at 11:01 AM

The January 2006 JazzSea Cruise toured the southern Caribbean on the M.S. Volendam with Tim once again performing as well as conducting the Banjos Aweigh banjo band, and giving workshops and lessons.
Posted by Tim Allan at 9:34 AM